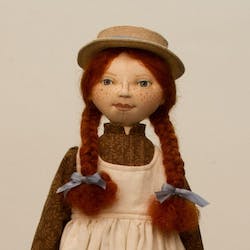 In the Beginning...We were ALL Beginners

Today I want to talk about our beginnings. What was, or is, your catalyst for making cloth dolls? Where do you find your inspiration? Is there a doll artist that moves you? A book? Something else? What kinds of dolls have you made, or want to make?

When I graduated from high school my parents bought me a sewing machine. I was thrilled! While I had no time to sew while attending college, after I graduated from nursing school I finally had the freedom to be creative.

So I started making teddy bears. I was inspired by a booklet I found called Making Bears by Nancy Southerland-Holmes. It was published in 1983, the year I graduated. I enjoyed this craft, but became a bit bored and wanted more.

We moved from Portland to the Oregon Coast. I bought a McCall's pattern and made Raggedy Andy dolls for my two boys, and really enjoyed it. I also made simple pancake dolls for the annual Every Husband's Nightmare Bazaar, and made a little spending money.

Then I found a book, and it blew my mind. Anatomy of a Doll by Susanna Oroyan showed me the possibilities; dolls that I never thought I'd be able to make; techniques I'd never heard of. And that was the beginning of my obsession of buying every doll book I could find. I was hooked!

When we finally got our first computer (with a dial-up modem!), I learned about a doll gathering/potluck in Portland. I was able to see, in person, cloth dolls similar to those in my books. There, I met Judi Ward. She offered a doll class at her home, and I was in!

This class led to the beginnings of a doll club we called "Reigning Dolls & Bears." We met at Judi's in St. Helens (66 miles from home) and were very active. Our doll challenges allowed us to grow and learn from each other.

Despite lacking the know-how, I built a rudimentary website and was able to share our club photos. We were active until about 2010. Sadly, the club disbanded after we lost our venue, but we still keep in touch.

I know sometimes it feels like we're creating in a vacuum, but in today's world we are so much more interconnected. Take advantage of it. Inspiration is everywhere!